One + One is a large-scale multi-artform project consisting of live performance, videowork, sculpture, collage and text-based installation. The project was first brought together in exhibition form as a touring show for Highlanes Gallery, Drogheda, and Wexford Arts Centre, Ireland in 2012. A publication ‘One + One’ with commissioned essays by Cherry Smyth and Mia Lerm Hayes, and an introduction by Steve Dutton accompanied the exhibition.

The project takes its title from Jean Luc Godard’s 1968 film One + One (a movie which is itself an assemblage of two quite different film sequences) and is inspired in particular by the sections in the movie where Godard filmed The Rolling Stones recording Sympathy for the Devil in a recording studio in London in 1968.  In addition to this film, the artwork also takes as a key source another section from a Godard work; the opening credit sequence to his film, Le Mepris (Contempt). Here we see a tracking shot being made, shooting a woman walking towards the camera, reading from a book. Le Mepris is a film about the making of a film of Homer’s The Odyssey. We assume therefore that the book she is reading is The Odyssey.  For this reason, and because of aspects of the project related to a particular site, in addition to these filmic references, James Joyce’s Ulysses (itself based on the The Odyssey) is also used as a literary source.

This extensive use of reference, quotation, re-enactment and ongoing interplay between sites of viewing and performance, and the representational ‘site’ of images, make One + One a complex project that invites participation by a viewer to recombine its elements and to move through the exhibition as if through a kind of puzzle that shifts constantly between ‘real’ and ‘representational’ modes. In addition, throughout all the works in the exhibition, people occur and re-occur in different guises, sites and roles. As such no distinction is made between roles such as ‘performer’ and ‘audience’, or ‘character’ (from Joyce’s novel, for example) and ‘viewer’. This indeterminacy of subject-position destabilises hierarchies and opens up the exhibition to a radically democratic experience. As a consequence, each site by which the elements of the project are anchored, whether real, recorded or fictional, becomes the activated locus of a relational potential; making one + one the beginning of an endless sequence of possible connections. 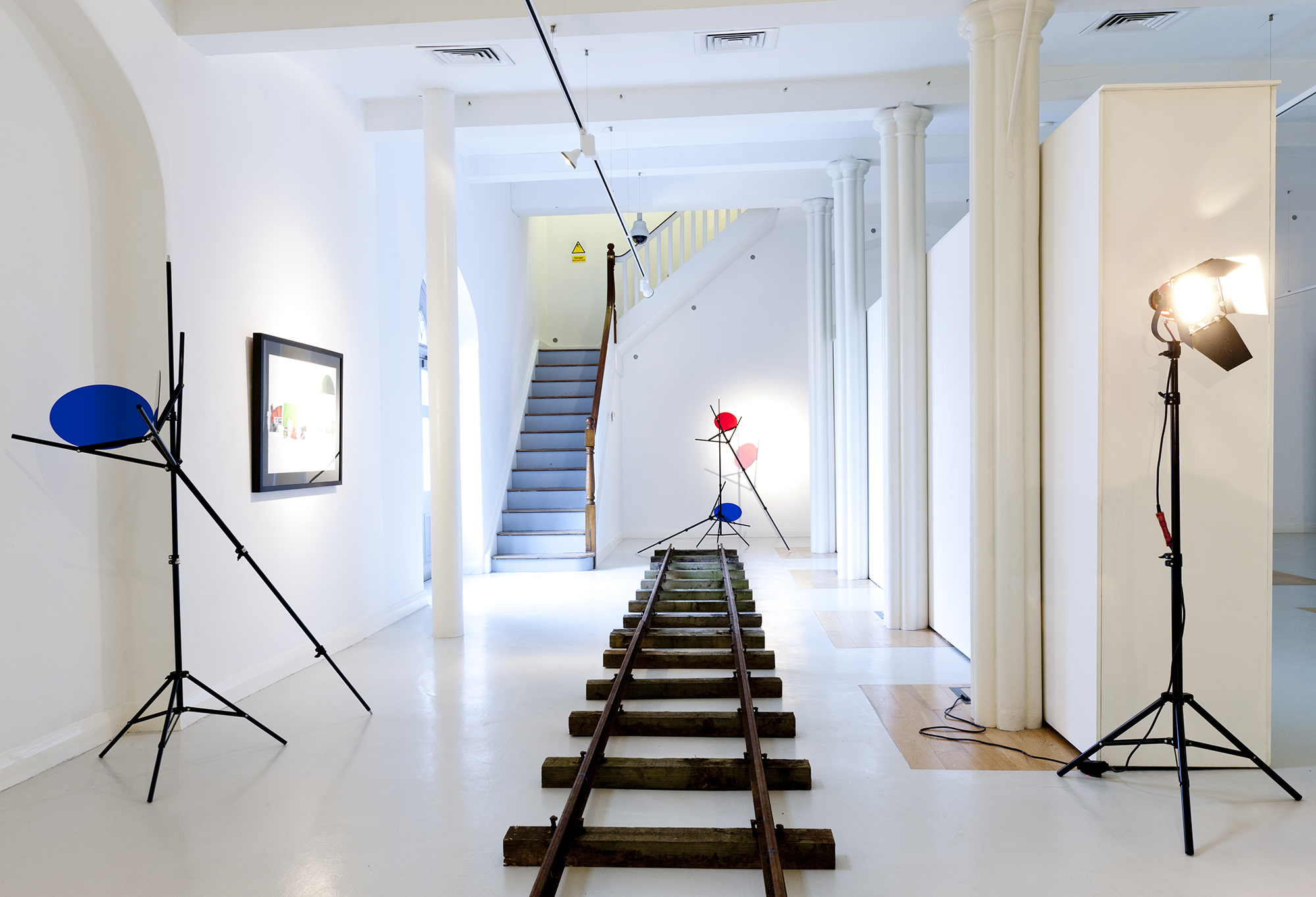 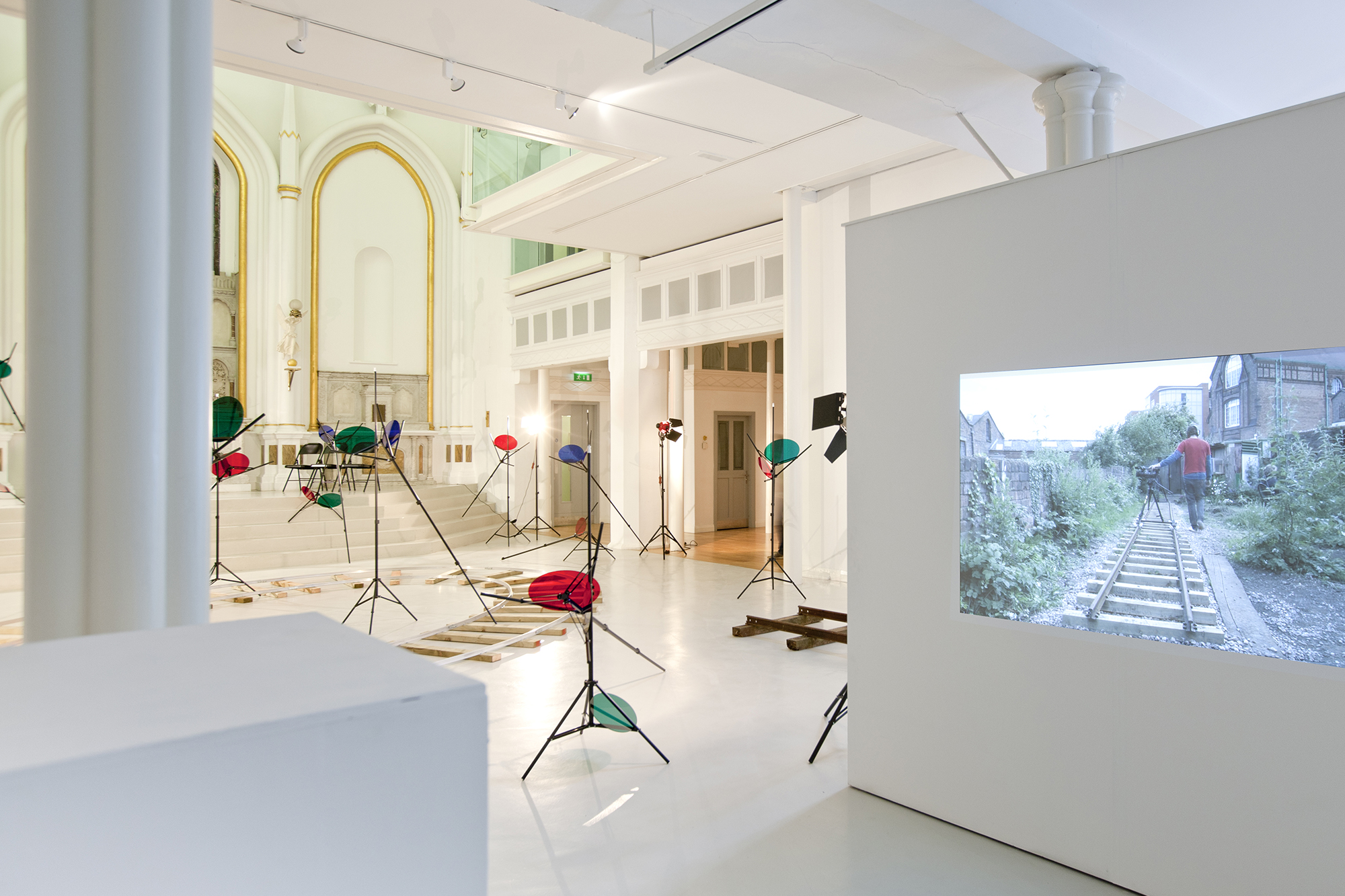 In response to these different influences, tracks and tracking become central motifs and methods in this new work. Previously most of the artist’s works have used fixed frame video recording, however here the camera is set in motion, introducing more cinematic tropes.

A trio of video works, each of which makes extensive and explicit use of tracking shots, are the basis for the exhibition: One + One (The Reading), One + One (The Song) and One+ One (The Film). The track also features as a sculptural and contextual element through the development of the project.  One + One (The Reading) was made while on an artist’s residency with ‘Behind Closed Doors’ for a public site in Digbeth, Birmingham; the Rea Garden. This site, a small area of abandoned and overgrown waste ground in central Birmingham, is surrounded by railway lines and canals. In response to this, and to provide a device for filming, the artist installed 12.5m of 22” gauge miniature railway that ran the length of one of the boundary walls of the site.
The work however did not only respond to the physical properties of the site, but also to its cultural and social history. Now a lively artistic ‘quarter’, Digbeth was once an industrial centre for Birmingham and as such home to huge numbers of Irish immigrants who came to work in the factories and on the canals and railways. It is still a strong Irish area and this aspect resonanted with the artist’s own experience as an Irish immigrant to Britain.

All of these factors finally led to a public live performance work, filmed using four separate cameras, in which the artist becomes the woman reading from Godard’s opening sequence to Le Mepris. Instead however of reading The Odyssey (in reference to the Godard film) she reads from James Joyce’s Ulysses. Itself based on the Odyssey, but set on one day, in one city; Dublin, Ulysses combines intense situatedness with the full force of a modernist universalising impetus. For the performance, the artist chose to read only the proper nouns in the book – names of people and places – and in doing so both addressed the Irish context of the site and at the same time ‘repopulated’ it.
As the tracking camera records without choice whatever it passes, consequently both viewers of the live performance and the artist reading (performer) are equally central to the image and the continually sliding shot. In the final video this, combined with the recorded voiceover of an endless list of proper names from Ulysses, makes for a scene in which no ‘one’ has priority over any other ‘one’; no single subject position is asserted over another; neither names nor places hold. Everything is on. 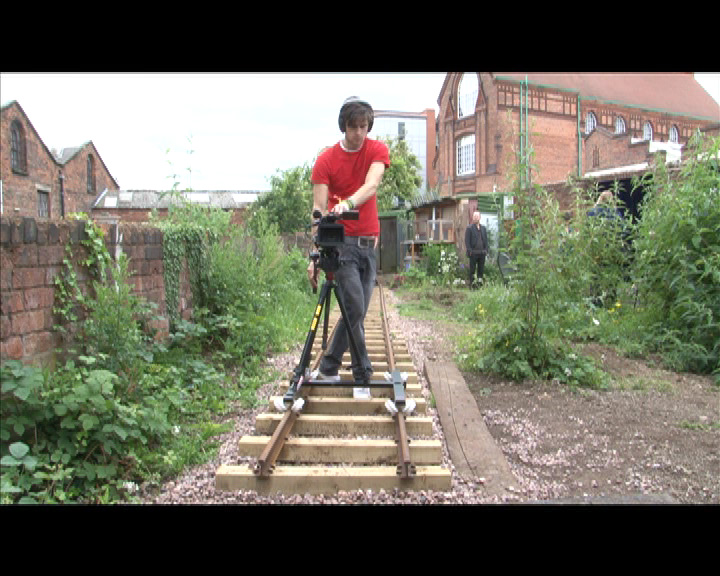 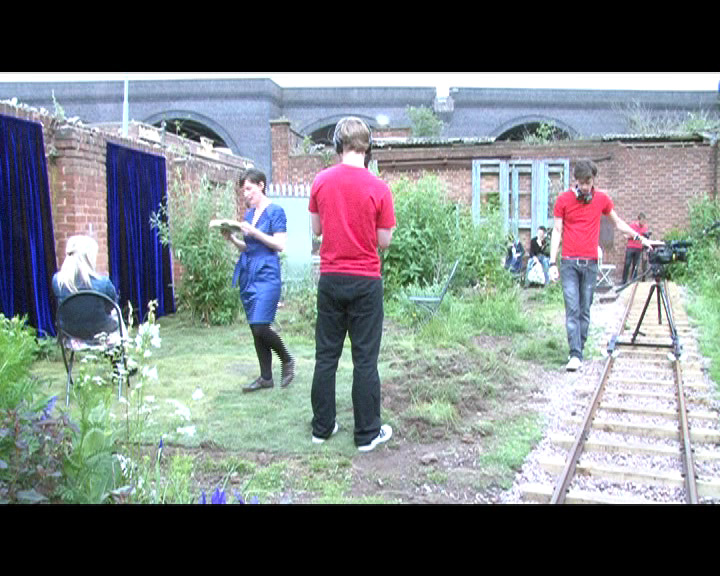 One + One (The Song) was commissioned by Highlanes Gallery for the exhibition itself, and redeployed two ‘protagonists’ from the previous video; the woman reading and one of the cameramen. This time however they trailed two cameras around a specially made elliptical track, and recorded an Irish sean nós singer and composer Linda Buckley, performing a new rendition of Sympathy for the Devil. Reconfigured into a three-channel work, the video continues to undo easy associations between subjects, naming and location. In contrast to One + One (The Reading) the work was filmed in an interior recording studio, emphasising aspects of theatricality and artifice that run through the project as a whole.

The final video of the trio, One+ One (The Film) was in fact the first to be made. In it the act of tracking is distilled to a simple back and forth movement, where the camera slides slowly across deep sumptuous blue curtains edged by crumbling red brick walls. The motion is repetitive and relentless, the camera falteringly edging along, scrutinising the materiality of bricks and curtains, but giving little sense of context and even less of narrative. Occasionally however, a title will appear; ‘The Tower’; ‘The Brothel’; ‘The Schoolhouse’… each suggesting a possible location. These titles relate to the chapters, or episodes, in Joyce’s Ulysses, and so they tie the theme of tracking back into the play of referencing that underlies One + One overall. Accompanying this highly intense ‘looking’ is a soundtrack of Alice Pierot playing Biber’s Mystery Sonatas on violin. Equally intense and progressive, the music gives to the work a sense of the hyper-cinematic.  All the tropes of cinema are here, without any of the purpose. The story, as it were, and all its possible protagonists, are left to the viewer to determine.

At the same time, the film is like a key to some of the recurring figures of the project; the brick walls, also viewed repeatedly in One + One (The Reading) and characteristic of the site of the Rea Garden in which the original performance took place. Also the curtains, visible outside in the Rea Garden and inside the recording studio for One + One (The Song). The same actual curtains also hang in the exhibitions at Highlanes Gallery and Wexford Arts Centre. Finally, naming itself is keyed; proper naming. And questioned. 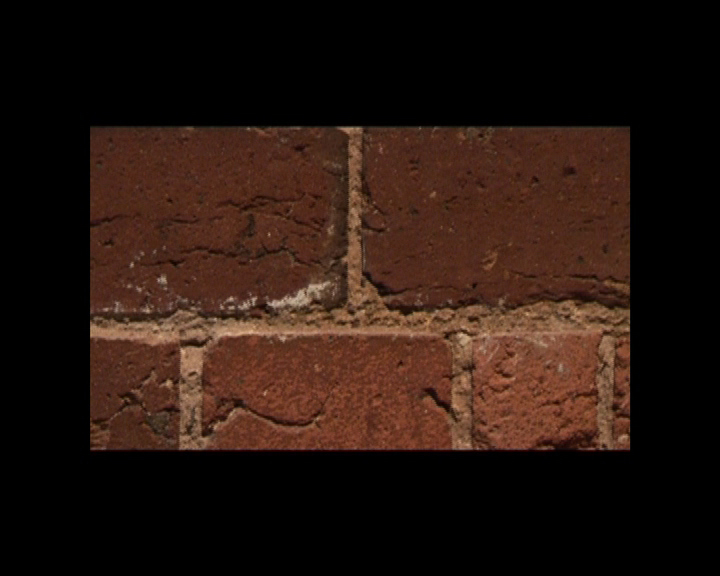 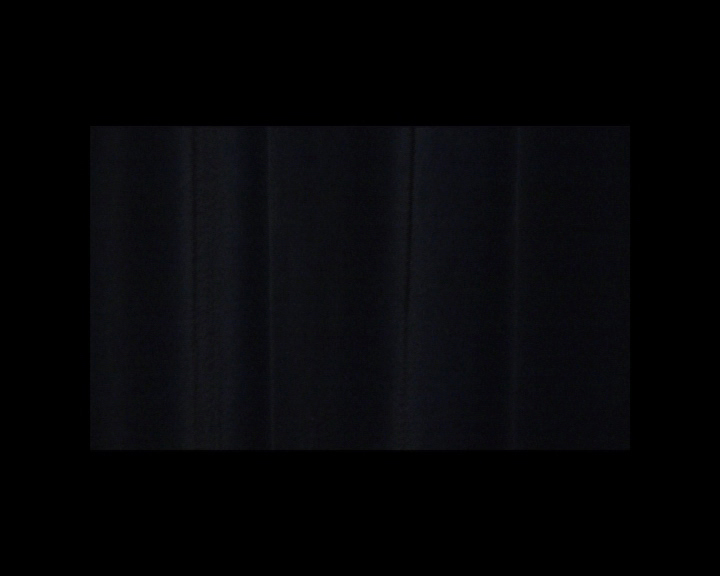 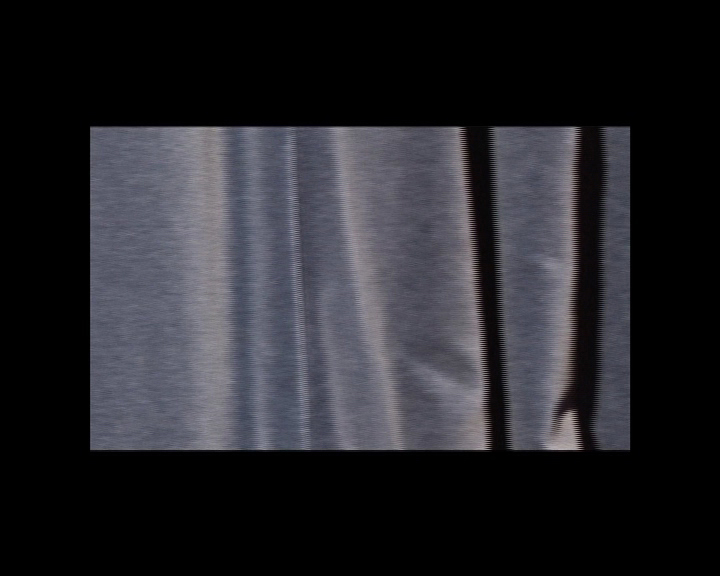 To bind this videowork with the others in the exhibition, and to link two separate spaces together, a final work was specially made for the context of Highlanes gallery, which was once a former Franciscan church. All the Gods, was a vinyl text work made for the walls of the gallery, in which all the instances of the naming of a God, or Gods, in Ulysses were isolated and pasted to the wall of the gallery. These names blossomed and fell along a staircase that linked an upstairs space in which One+ One (The Film) played continuously to the main downstairs gallery where the remaining Gods nestled behind the free-hanging blue curtain.
In the touring version of the exhibition at Wexford Arts Centre, the Gods were replaced by the Satans, a mere five mentions making up that vinyl textwork, All the Satans, for the walls of the gallery.

Throughout the whole project, protagonists, subjects abound but they remain unbound; free floating, un-fixed, appropriable, yet present with the imperative of potential connection. 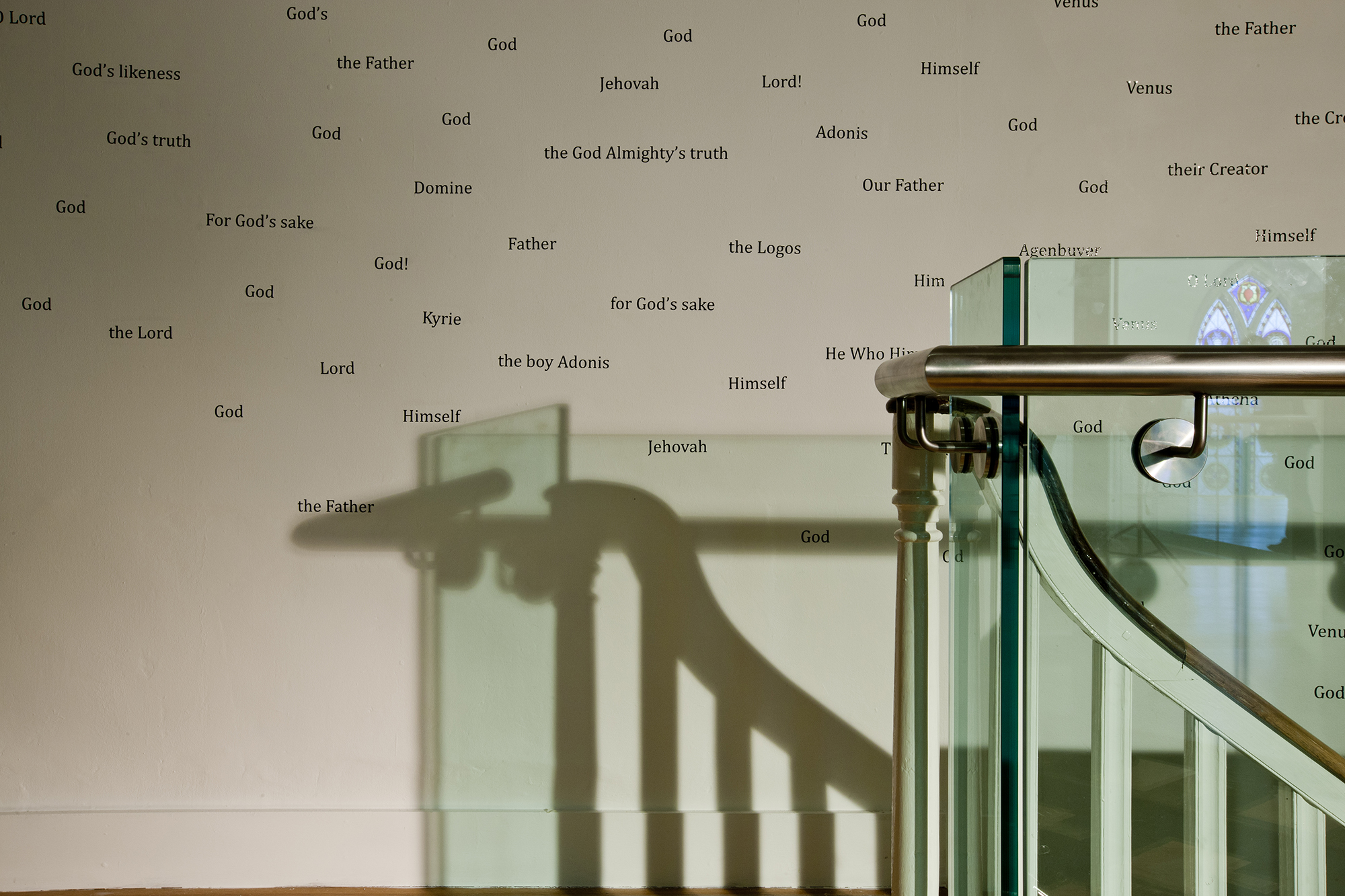