N scale takes as its starting point a fire that took place in a factory in Thailand on 10th May 1993, killing 188 people, mostly young migrant women. The factory was owned by Kader Industrial, a global multinational that makes toys and miniature rail accessories for Western markets – specifically ‘n scale’ plastic shipping containers, sold in the UK under the Graham Farish/Bachmann brand. The work aims to recuperate the tragic and needless death of these victims, through a ‘living memorial’ that stages remembering as an act of critique and reflection.

As a project N scale borrows from the tripartite form of many public memorials comprising therefore of a sited memorial sculpture, commemorative events and a membership organisation.

The project is ongoing and will develop over time. Future showings of it will be posted in the News section of the website.

A related project Collateral which memorialises a number of other recent factory fires and disasters is a forthcoming commission for the British Textile Biennial, 2021. Details of this project can be found in the news section of the website. 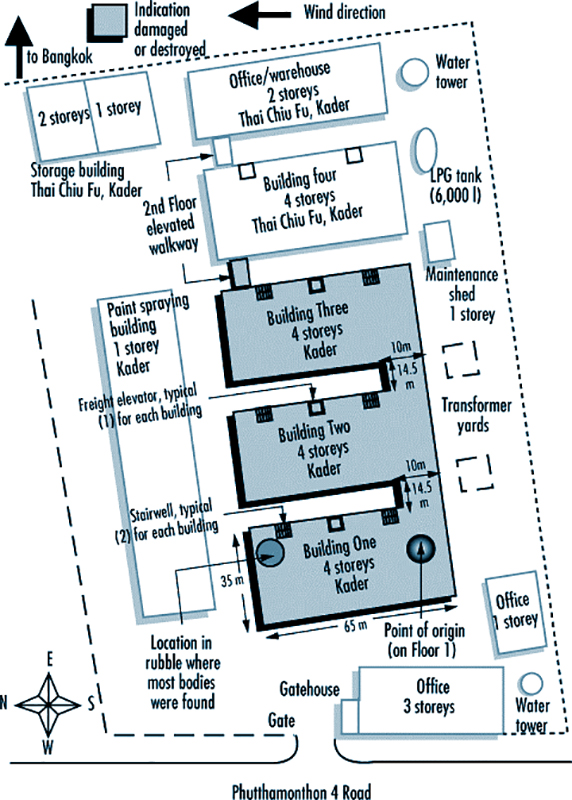 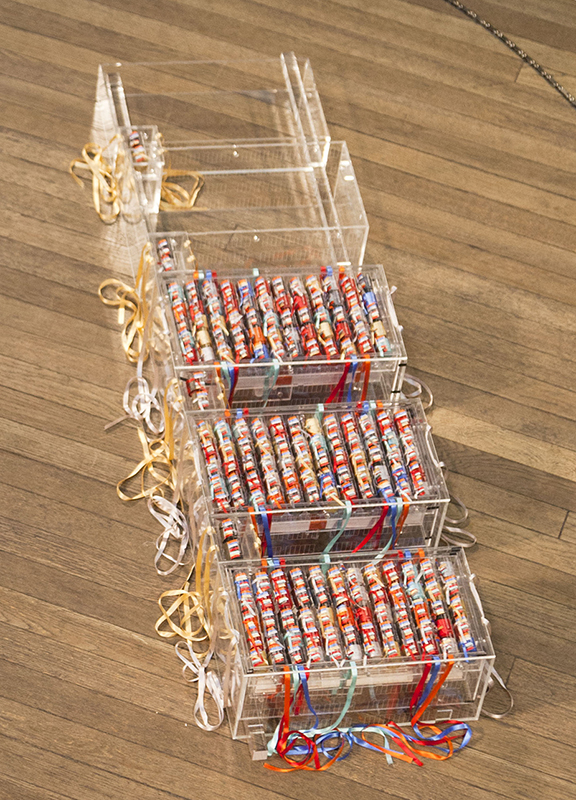 Reflecting the endless flow of global supply chains, the N scale memorial sculpture does not have a permanent site but is instead a kind of itinerant ‘vessel’ made of nested Perspex boxes, designed into a configuration drawn from the site plan of the factory complex that burned down. It contains 188 tiny ‘n scale’ plastic shipping containers, wrapped up in ribbons, each one a small relic to each of the 188 victims. When docked the ‘vessel’ can be unloaded in the form of a commemorative performance that tells the story of that fire and other similar factory disasters, and that also names each of the 188 victims. Viewers are invited to participate in the ritual of the performance in different ways and to become a custodian of a victim’s name by becoming a ‘rememberer’ in the N scale membership organisation.

A pilot commemorative performance of N scale took place on May 10th, 2017 at Conway Hall, London.

The aesthetic and visual language of N scale is inspired by C19th Victorian Trade Union and Worker’s Association emblems. These emblems provide a deeper context and history to the project, bringing into relation Britain’s industrial past with contemporary supply-chain globalisation and the outsourcing of industrial work to countries in which labour is cheap and health and safety laws are lax. The textile industry in particular is prey to exploitation in this way as its infrastructure is easy to relocate, and its workforce are often young, migrant women with few rights and even fewer options. As a consequence the tragedy that was the Kader Industrial factory fire of 1993 is repeated over and over, and as Friedrich Engels wrote in 1843, “the holes and cellars that confine our workers night after night are not destroyed, they are merely moved elsewhere.”

However just as industrial workers in 19th century Britain did, today’s factory workers in China, Bangladesh, the Phillipines, Thailand, Vietnam, India and elsewhere across the world, are fighting to organise, to claim proper wages, rights and compensation, and to be able to work in dignity and safety. And many campaigning organisations are supporting their fight, by calling on brands and consumers, to take action to help change the working lives of those who make so many of the things we buy on our UK, European and American high streets.

As an artwork N scale hopes to contribute in some small way to this fight, by bringing these tragic circumstances to our attention and by asking that, through the shared and affective act of memorialisation, we contemplate our part in this chain of connections and act accordingly.

The images of Trade Union and Workers’ Association emblems that I have been researching are from union membership certificates, more elaborate and detailed than their more famous cousins, the trade union banners. I have looked at many in the collections of the Working Class Movement Library, Salford, and the People’s History Museum, Manchester. But I first discovered these emblems after seeing this one designed by AJ Waudby for the Operative Society of Bricklayers in 1887, in the Science Museum, London.
The emblem is an elaborate collective statement, an assertion of value and presence by each different trade in visual, textual and architectural form. And as a membership certificate it is also a record of belonging.

N scale also aims to provide a mode of belonging, but to a broader and more diffuse, more dispersed, more inchoate coalition. One in which the names of the one hundred and eight-eight workers who died in the Kader Industrial fire, are passed on by word of mouth, and become living statements to an immeasurable and uncountable loss. 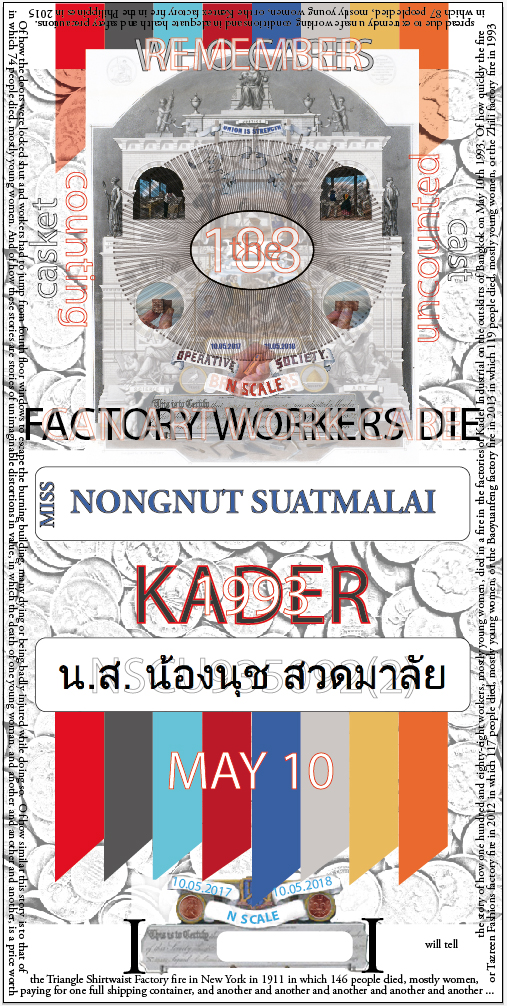 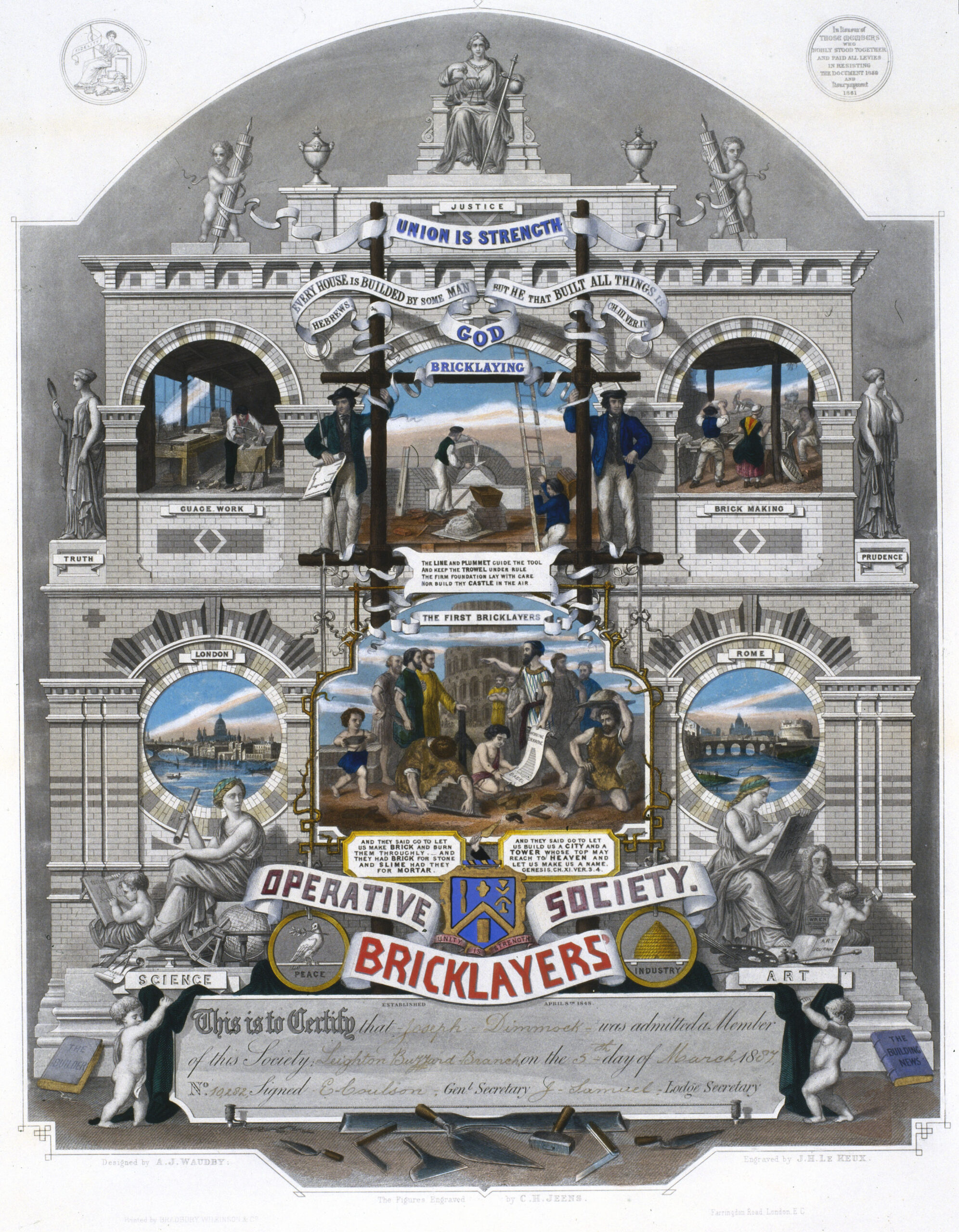 Membership certificate for the 'Operative Society of Bricklayers, 1887

When the N scale memorial sculpture is shown without a live performance element, it is sometimes accompanied by a ‘video emblem’ that elaborates on the background, meanings and use of the sculpture.

This video is a work-in-progress and will change as the project itself develops. An early version of it can be seen below.