Vexations was a commissioned project for Site Gallery, Sheffield as part of their Site Platform series (2007/8). Site Platform is an ongoing project at Site Gallery that creates a space for artists to develop new work live in the gallery whilst also allowing audiences to engage with the process. Artists are given up to two weeks in the gallery to develop ideas and processes which embrace experimental, explorative or cumulative practice.

Vexations used as its starting point Eric Satie’s famous and enigmatic musical composition of the same name from 1893. Satie’s Vexations is a very short and difficult piece for piano, the manuscript of which included an epigraph that stated “to play this piece 840 times one would need to prepare oneself in the greatest silence with serious immobility”. The suggestion that this short composition should be played repeatedly 840 times has become a taunt for musicians ever since and makes Satie’s work perhaps the first piece of conceptual music.  Full performances of the work have been done by composers and musicians such as John Cage, Gavin Bryers, and others.

For my Site Platform project I chose to use this piece as a way to relearn how to play the piano and to do this live in the gallery space over a period of 15 days. While learning to play, I also developed a large wall-drawing/score on which I recorded my experience of ‘relearning’. This wall drawing was photographed automatically every 6 -10 mins throughout the 15 days, producing in the end a set of 840 still images.
The images were printed out onto A3 sheets and eventually installed in the gallery space, making physical the idea of the 840 repetitions. These prints also became a new visual score.

Six of the 840 A3 prints that were installed in the gallery.

At the end of the two-week residency in the gallery, a live performance was held where a selection of the images produced from the process of relearning were given to two professional musicians, pianist Steve Beresford and cellist Liz Hanks, to improvise from. Sitting in different areas of the gallery space the two musicians played in response to the new score and to each other. 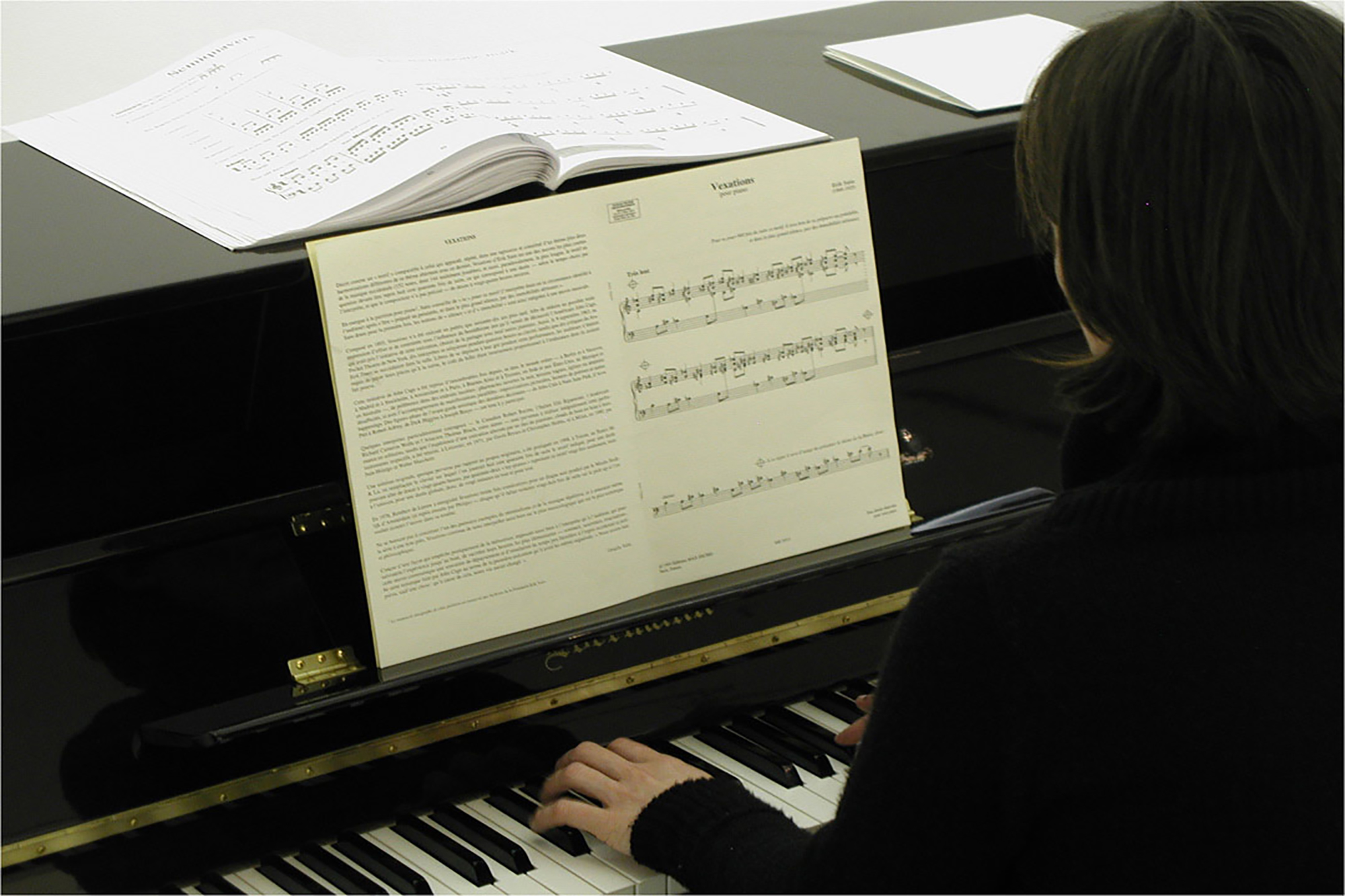 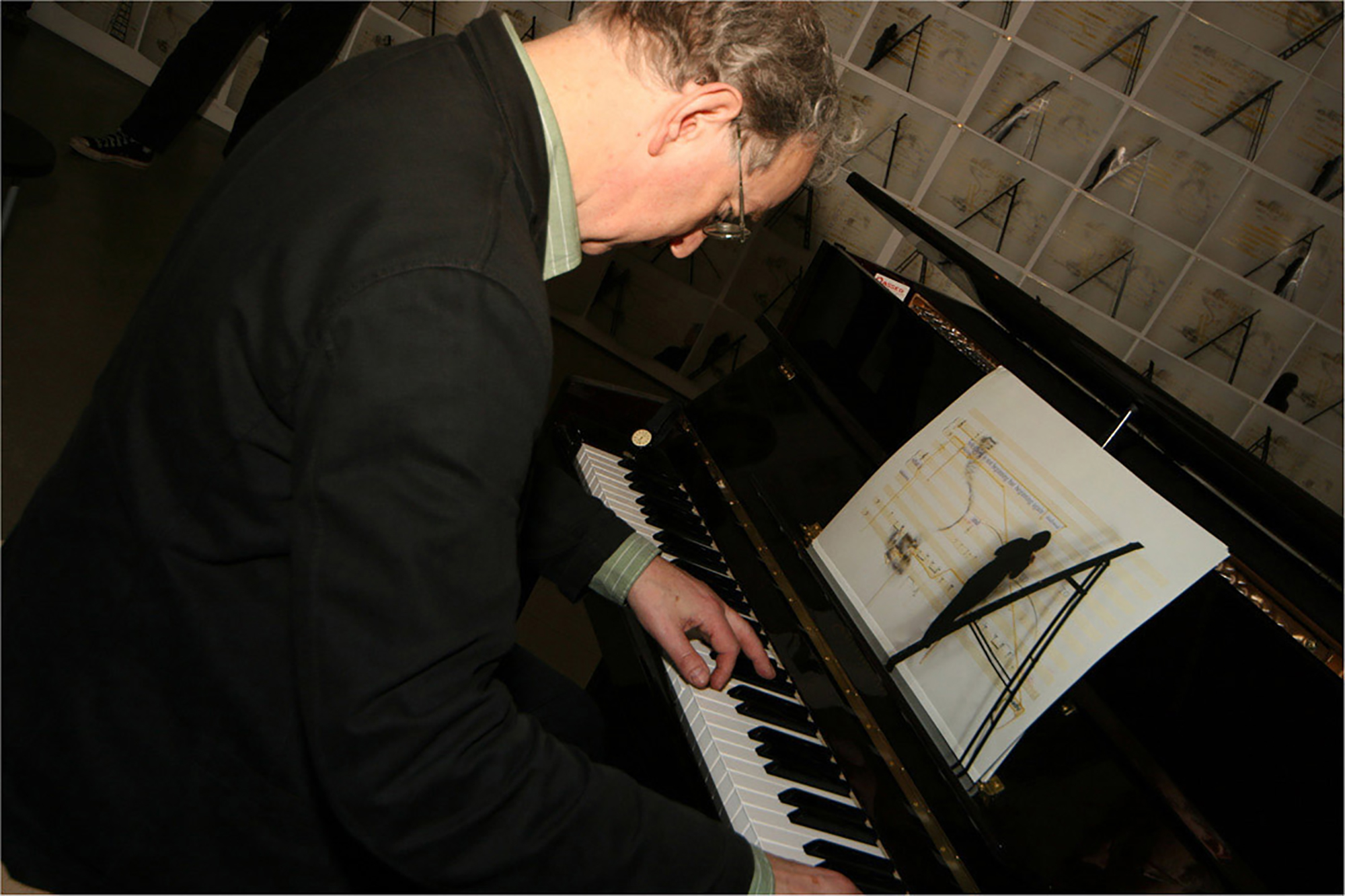 Vexations was subsequently shown in different configurations at Art Currents Institute gallery, New York in 2012 as part of my solo exhibition Horizontal Ontologies. The work was also included in the Site Platform survey exhibition, Platform, In the Making, at Site Gallery in 2013, a group exhibition celebrating the Platform series. 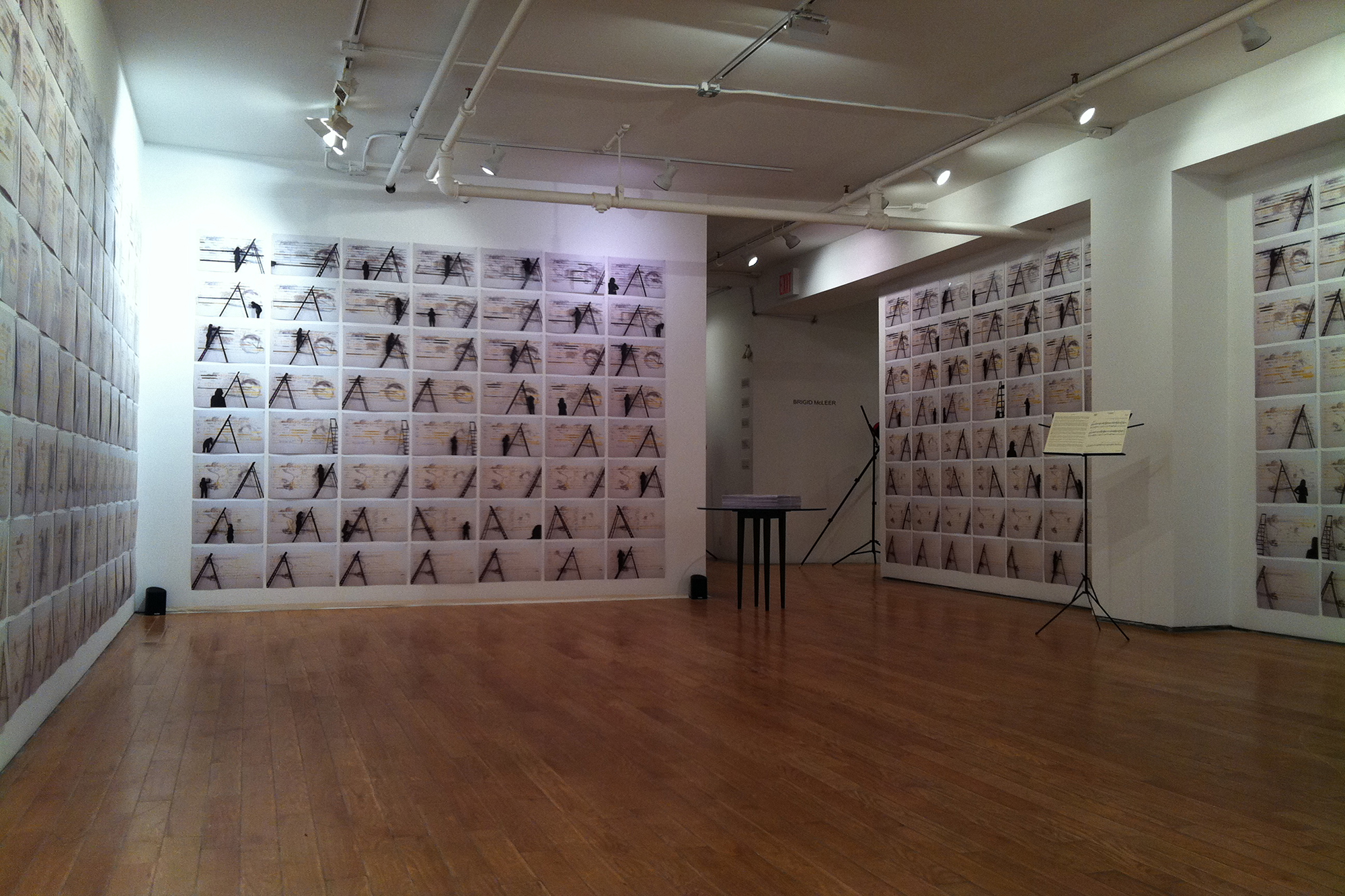 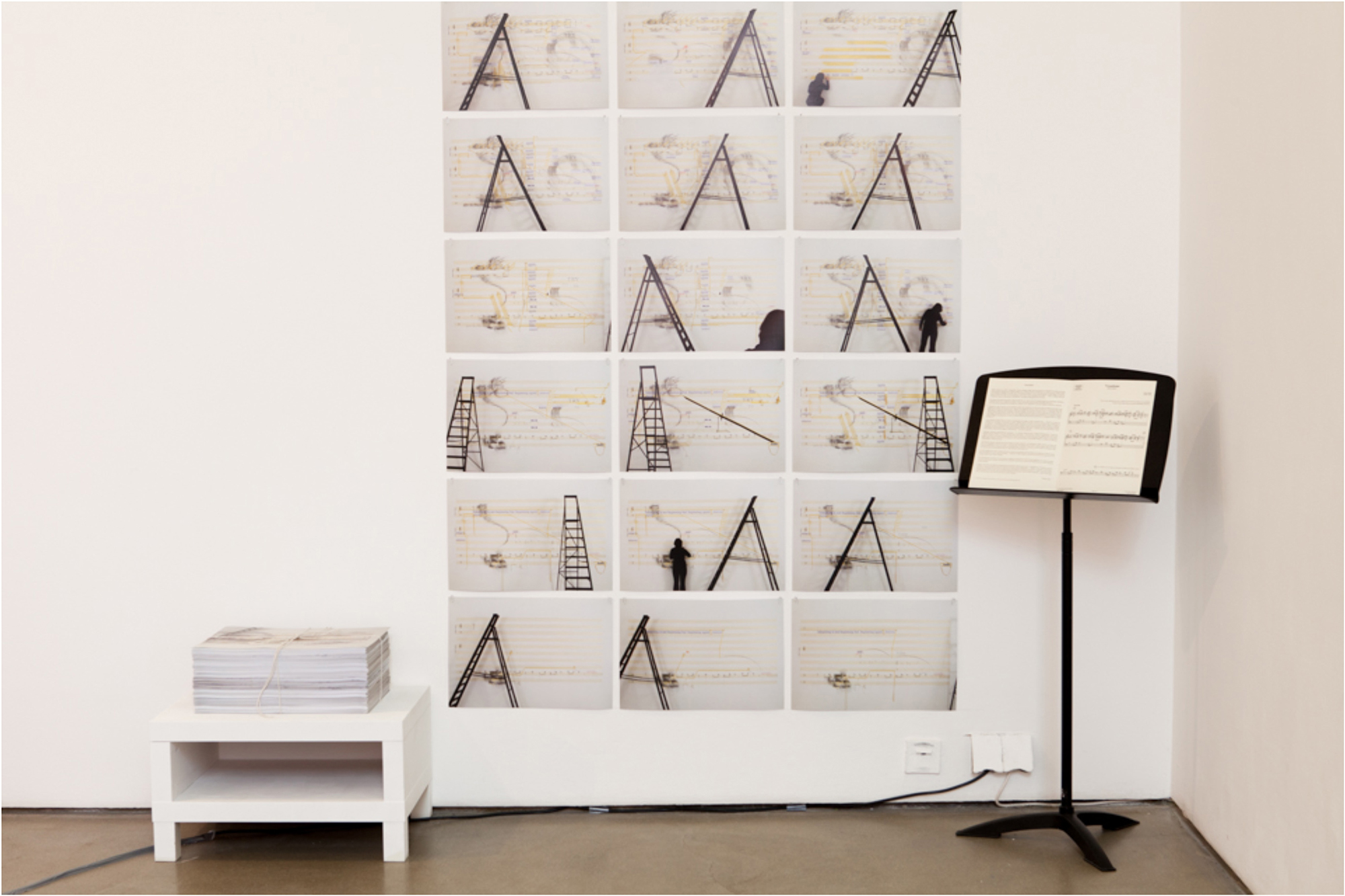 As part of the Platform commission in 2007, Site Gallery commissioned a writer to produce an essay on each Platform project. Film curator Alex Hetherington was invited to write about Vexations. His essay is below.

Brigid McLeer’s work occupies and unifies diverse and converse terrain of theories and motivations in contemporary art forming a montage between performance and live art, minimalism and the cinematic, photography and the documentary, seriality and language, appropriation and the interrogation of code-based systems (the in-between of visual to aural, written to visual, aural to visual). She evolves, through a multiplication of processes, the manifestation of a schema, a conceptual direction; her methods are rooted in intellectual lucidity and emotional integrity that change the simple to the complex, the momentary to the ‘long take’, the internal to a dimensional presence or aura. She amplifies the relentless passing of time forming a fabric to which she attaches deliberate questions of reality and existence.

McLeer employs a collage of material, media and sources that explore through discipline, personal observation and duration a quality of slowness and “stretching” that set up conflicting resonances: psychologically-activated spaces and time, boredom and endurance, rest and work, mistakes and repetition. And significantly obsession and precision with converse, opposing values of improvisation and spontaneity. McLeer is also interested in the negation of the object in art, making the space in which she works (its occupation and intervention) and the experience of entering and encounter its essential aspiration. She gives deliberate manifestation to what Christian Metz describes as creating an “abduction of the object out of the world into another world, into another kind of time.”

Vexations sets out with two core stimuli: to examine the eponymous musical score by Erik Satie (1893) and a challenge to herself to relearn the piano, to learn this piece. This activity of learning the piano once lost to McLeer’s childhood is re-employed here as a performative trajectory of restitution, an instruction to revive, a groundwork for seriality, drawing and expansion. Taking the ‘suggestion’ Satie makes in his score to play the piece 840 times (as a repetitious mantra, a musical exercise in trance and sustain) is interpreted here as an opportunity to rescore, redraw the piece as a kind of storyboard, a progressive visual sequence of 840 individual photographs/drawings that depict McLeer’s interests in time/movement, movement/stasis, suspension/culmination, translation/activation. A freeze-frame act.

McLeer has created a kind of transitory indexing of Satie’s score that is then given to musicians to respond and perform closing her cycle of code to code, language to language: the musical to the visual, the visual to the musical. Her course of action is rooted in a set of self-imposed instructions framing the process by documenting her drawing, erasing, copy and paste upon the score, her physical presence, its scale and her negotiation around it (the score is made enormous, she requires ladders to reach its extent). She adds texts and feelings to its structure visually, all the while returning to the piano to absorb it musically. Her drawing/time is rendered as gradually captured single frames that accumulate to mirror a deepening ‘withdrawal’ into Satie’s work. In turn they represent a ‘progression’ into a ‘present tense’ memory of enforced childhood piano lessons with their accompanying senses of restraint, labour and frustration.

The galleries are furnished with this ‘difficult music’ and its visual interpretation, it occupies its walls investing Site with concentration and slowness. The 840 frames all black, white, gold, silhouettes, text, scribbles, writing, tape, painting are posted in a spiralling ‘crescendo’ of voices, silences, rages, mistakes, resignation, reflection. She mutates the score rendering it as photographic ‘surfaces’, negating its object-based dimensionality and rooting these ‘time-images’ and its processing within the critiques of the cinematic and the screen in art. In particular: the still and stillness in the moving image, visualizing the passing of narrative time, continuity, observations on the ‘long-take’ and contradictions of the camera’s gaze and ‘point-of-view’.

The installation deliberately obscures the artist’s authorship, our voyeurism and artist and photograph as fetish and gives evidence to what Raymond Bellour describes as  the “pensive spectator”, that is the “time the spectator cannot control” and a shared, the audience’s and artist’s “consent to illusion”, our immobility at entering the image-time and our desire toward “a quest for hallucination”: it is past and present in perpetual dilemma. Likewise McLeer breathes passionate life into László Moholy-Nagy insight into the image-sequence: “Here the single image loses its separate identity and becomes part of the assembly; it becomes a structural element of the related whole which is the thing itself. In this sequence of separate but inseparable parts, a photographic sequence… can either be a potent weapon or tender poetry.”

Satie’s score, a short, single page notation is a conceptual trick; it retaliated against contemporary bourgeois conventions, predated modernism’s infatuation with experimentation and reinforces his eccentricity that led him to such genres as ‘furniture music’, precursors to Ambient music or Musak. McLeer sets up an invocation of his imagination, an evocative reliving of his originality, a respectful, expressive ‘close-up’ of his radical work.

On the 12th of January 2008 a performance is given of McLeer’s Vexations. A crowded gallery is presented with the completed image-sequence and in one room the pianist Steve Beresford, in another cellist Liz Hanks. The musicians are given the opportunity to respond, in separation,  to the score-image, while McLeer gives her rendition of the original. McLeer’s performance is fragile and nervous, while Beresford and Hanks fill the galleries with sonic dialogs: exchanges of melancholy, sweetness, aggression and intensity. The performance delivers a saturating atmosphere, Satie’s score appearing and disappearing, the new score voicing mesmerising states of control, diffraction and interference.

The overwhelming narrative of the performed musical work is this exhaustive exchange,  pivoting between McLeer’s vivid mediations, her inspired mechanics between sound and image.

Throughout this work McLeer returns repeatedly to the musical instruction TACET (silence) and references John Cage’s totally silent score, his insistence on an absolute silence, an absolute music bound by absence. Silence here is used as a potent sign of McLeer’s considerations on translation; silence negating language, it suspends communication by simulating the void. This reinforces some of the conceptual  instabilities implied by Vexations, underscored by its allusions to Roland Barthes’ texts Camera Lucida and Image-Music-Text: the photograph as denial of decay and time,  preserving history (simultaneously here and now and then) yet implying a kinship with death, an image of life after death. Equally an absence of sound suggests the void, returning to sound restores us to life.  As Pier Paolo Pasolini insists: “It is thanks to death that our lives become expressive” and “because while living we lack meaning and the language of our lives (with which we express ourselves and to which we attribute the greatest importance) is untranslatable; a chaos of possibilities, a search for relations among discontinuous meanings. Death performs a lightning-quick montage on our lives; that is, it chooses our truly significant moments… and places them in sequence, convening our present, which is infinite, unstable and uncertain, and thus linguistically indescribable, into a clear, stable, certain and thus linguistically describable past…”

This is Vexations chief proposition. McLeer supplants and allegorizes Satie’s notation of repetition, longevity and authenticity with a montage of deliberations on existence, instance and forgetting, deliberations on impermanence.