This project comprised of photographs, video and further proposals for development, is based around a derelict house in Ireland.
Belcamp House is a late 18th century mansion situated just north of Dublin, designed by James Hoban an Irish catholic architect and builder for the protestant parliamentarian Sir Edward Newenham. Hoban subsequently went on to design the White House in Washington DC in 1792. This connection alone would be interesting but what is even more compelling about the house is that it would appear to be, in plan and layout, a smaller, preemptive version of the White House, complete with oval room. 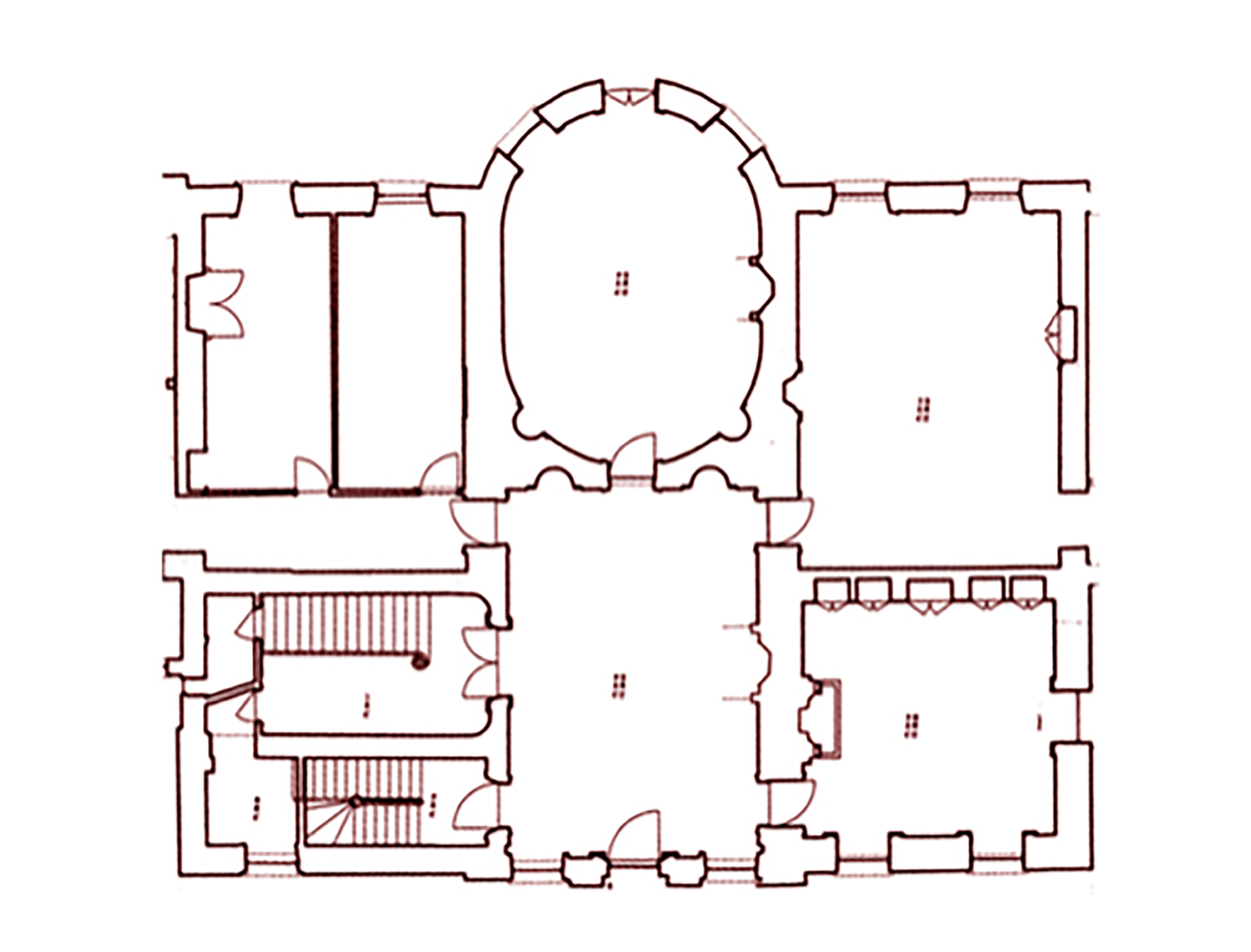 The house had lain empty and unused for many years due to the economic crisis of 2008 when the property became part of NAMA, the Irish government organisation for management of toxic debt. Since then it has been re-purchased by property developers Gannon Homes, and is currently scheduled for redevelopment as part of a larger housing estate. In the interim the house was subject to numerous break-ins and arson attacks. When I gained access to the building in 2015 it was in a very derelict state.

It was this abandoned and destroyed quality of the house, and in particular of its oval room, that drew me to it as a  metaphor for the ruins and corruption of contemporary democratic politics. 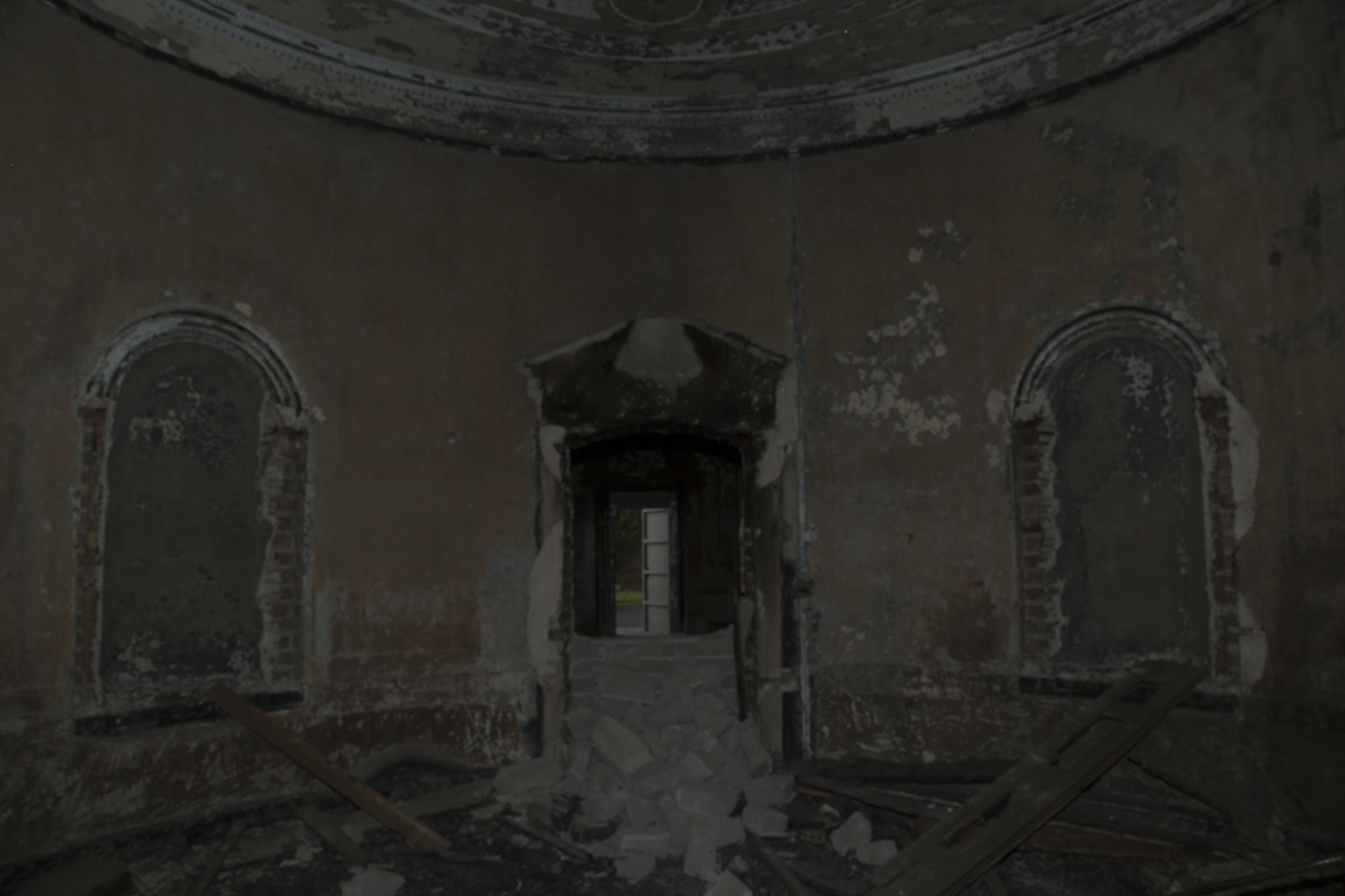 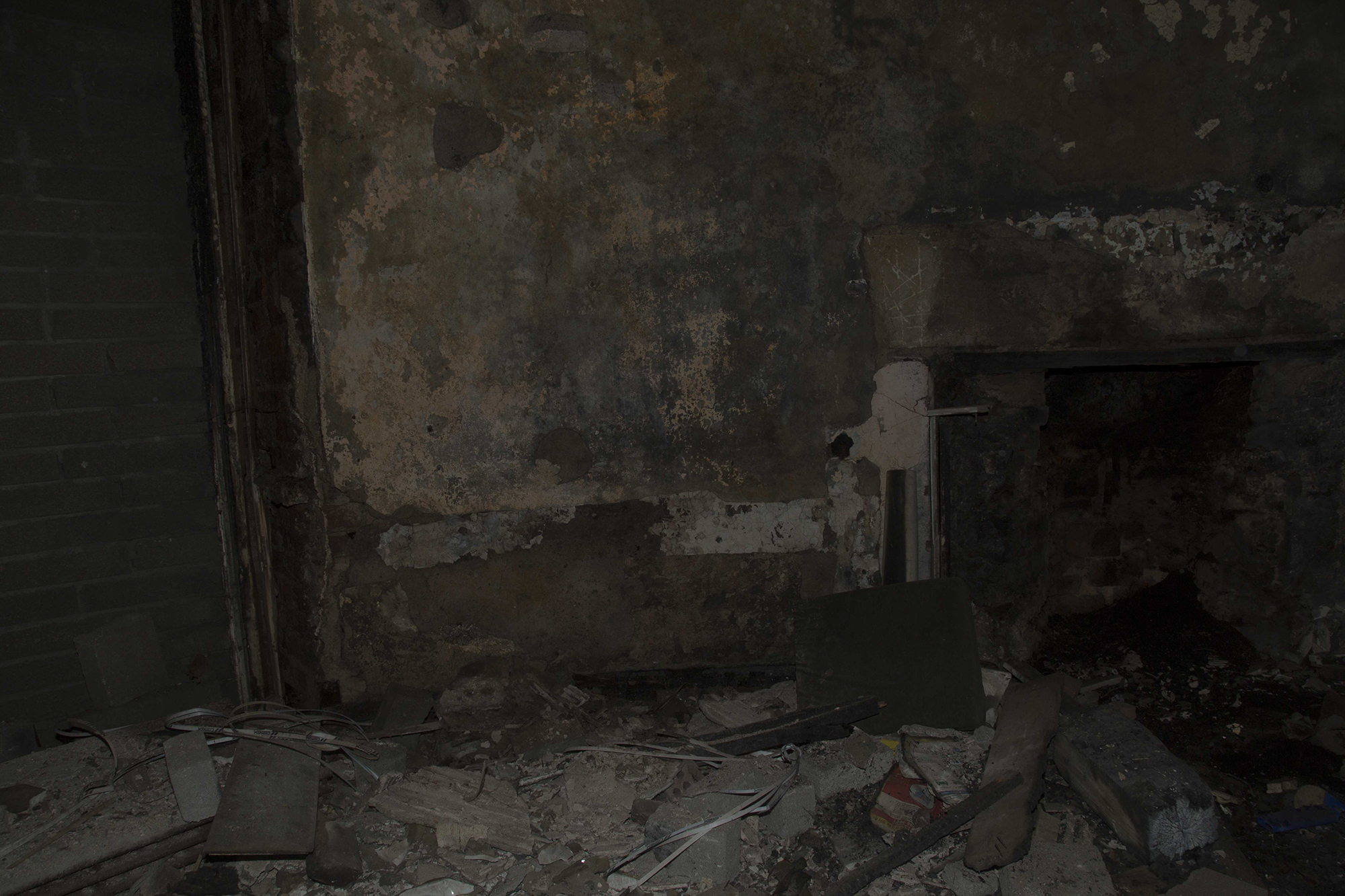 I was particularly drawn to the oval room. In previous projects such as ‘One + One’ I had used an oval shape because of its eccentricity; an oval is an ellipse that has two centres rather than one. This extra centre and its implicit reciprocity has always interested me and this, combined with the range of political undertones carried in the dereliction of the oval room at Belcamp, became the basis of a number of experiments in image and writing that I produced in relation to this site.

The video below was one of the first of these experiments.

In 2018 I was invited to write a chapter essay on the project for The Creative Critic: Writing as/about Practice edited by Katja Hilevaara and Emily Orley (Routledge 2018).

An extract from this essay Returning in the House of Democracy follows.

Returning in the House of Democracy

There is a room, an oval room, in a house on the east coast of Ireland. The room frames an ellipse and a floor of ash. It is perforated by four apertures, all of which, when I first encounter the house, are bricked up. The stories I will tell about this room are speculations on transformation and potential. Each time I return the stories begin anew. They too are elliptical as they do not ‘come back full circle to the same’.[1]

I first saw the room through a photograph.[2] A scene of symmetry and damage, in portrait format, it is a strange photograph in which the ceiling predominates. Like a mottled heaven, soaring above the ruins of a neoclassical ideal, it declares the room’s ellipse and is resplendent even in its ruined, discoloured and charred condition. Below, a sea of burnt and broken planks of wood flood the ground and the wall’s surface disintegrates. Despite its portrait format, no person is captured in the photograph instead it is the outside light that burns through the open front door, reeking of substance, that seems to occupy the interior. That, and the effects of fire, a force of so-called ‘outsiders’ who are visible only by the aftermath of their actions. But their absence does not lessen the event of the photograph nor its quality of encounter. Rather it betrays their exclusion and turns the room in all its devastation into a civil demand. One to which the photograph might respond. It reveals the means of the room and of the image: a turning, if not a revolution.
I am returning to the house to partake in this means, through photographs, writings and other records that are trying to resist capture and admit a form of political appearance in which equality reigns. I am returning to the house to partake in a radical figuring of the democratic, a ‘promise of politics’ that the house and its oval room prefigure. And I am not the only one…

Architecturally the ellipse is a Baroque form, enjoyed for its dynamism and its sense of excess. As such it is audacious, normally employed in public spaces or rooms for assembling. As a geometric or architectural figure, the ellipse is a figure of decentring or de-origination as it is drawn via two centres, two foci. The circle, to which it is estranged, is really only a special form of ellipse, in which the two foci overlap. Understood this way the ellipse is a dynamic and irregular ‘circle’ adrift from origin, yet recurrent. But it is also a figure of equidistances, an anarchic figure described by the shared-separation of equalities. Astrologically, Johannes Kepler’s discovery in the seventeenth century of the elliptical orbit of the planets was devastating as it disrupted the ideal order of the universe, a Platonic vision of concentricity within which a singular mastery reigned. And while the planets do not orbit two suns, the centrifugal and centripetal forces at play between sun and planet require that another ‘sun’ be invented to mathematically prove their irregular motion. Kepler called this false sun the ‘equant’. One might think of it as an equalising origin, another origin, conceptual perhaps but no less bright for that.
And when these equals meet it is a return. But not a return of the same to the same, this would be to close the circle and to delimit stasis. A return of the same to the other is the perfect unbalancing that returns the other to the same and undoes sameness: a wobble, a fall, a retombée, an elliptical return. It only takes one, stepping out and up to the rule, to upset the motion of an entire universe, to revolutionise the spheres and make temporal millennia of firmament. The stateless perhaps, a ‘non-citizen’, a refugee, a traveller resisting crude forms of interior in a house, a State, a nation, a world, from a distance not a division – a shared-separation – that throws the centre off and demands to be equalised and inhabited as a singular and universal refuge. As with the sun’s equant each time the stateless return it is a profound decentring, which here in the house is drawn into the room as a figure and the figural, appearing.

The ellipse therefore is the outer figuring of the place or appearance, not of a duality but of an equality. It is a powerful figure because prior to the equality there was no place, no appearance, just an origin asserting its closure. Etymologically both ellipse and ellipsis are a falling short of closure, of the end. They are gestures to the outside and its infinite potential, from within.  When built as a room then the ellipse is a kind of contradiction, an interiority that moves towards the outside and doesn’t settle. It is a space built for encounter, with an outside or an ‘other’, in a forum that pertains to the public realm.

Belcamp House is situated in the east of Ireland near the sea on private land bordered by low-income housing estates, travellers’ halting sites and the airport further inland to the west. It is now on the edges of Dublin city in an area called Darndale considered to be a place of poverty, gangs, drug crime and hopelessness: an oblivion, set for redevelopment.
When the house was being built in the late eighteenth century, on the east coast of the ‘new world’ a revolution was starting. It declared itself a revolution on behalf of ‘the people’ when in fact it was a move to replace sovereignty with governance in a form no less exclusive. Fuelled by an idea of freedom and equality set tightly within limits it was forming a new government in fear of the democratic and unpracticed at equality, yet around it democracy was surfacing in defiance. For the people whose land it occupied, equality was a perfected means, struggling to remain at large. Over time this new form of governance would come to embrace the language of democracy and align it with (its) national independence but despite its many achievements it would remain a nation of the interior, powered by domestic and private values and fear of the outside; a ‘house’ that would rule the world through a promise it could not keep.

From the house he was building in Ireland, the parliamentarian Sir Edward Newenham was also practicing a form of limited radicalism, fighting for his own version of freedom from sovereignty. His was to be a Protestant revolution, a break from the same King and country, a new constitution for the same ‘men of property’. When the American colonists in 1776 first declared their break from British sovereignty, they did so in the name of republicanism. Theirs was a constitution premised on representation by men of property ‘elected’ because they had the time and reason, by virtue of their class, to stand for ‘the people’. Yet ‘the people’ were not to be consulted extensively, lest their own reason appear.  Newenham was inspired by the colonist’s declared independence and grew fervent, ambitious, idealistic, powerful. Yet he too would admit no ‘outsiders’ to his forum of power.
Then at some point between 1775 and 1785, before he emigrated to America, a young up and coming architect and builder named James Hoban was admitted to Newenham’s estate to make plans for a house. Hoban was a Catholic from County Kilkenny, son of a tenant farmer and talented, ambitious and lucky. At some point, though it is unclear how this came about, the two met and began to design the house that would be built.
In the years following Hoban’s arrival in the new federal ‘United States’ plans were being drawn for a distinct national capital, a ‘district’, strategically located between Northern and Southern States. It would provide a locus and protection for the institutions of government and would contain the ‘City of Washington’ named after the States’ first President and by 1792 it became clear that the President too would need a house there, a house, not a palace.
James Hoban had met with Washington in Philadelphia shortly before submitting his proposed designs for the new presidential ‘house’. It is possible that he was influenced in his design by Washington’s fondness for a bow window, set into a curved wall, which he had had specially built into his house in Philadelphia. Washington hosted weekly levées (meetings with male citizens who had applied in advance for an audience with the president) in this space every Tuesday at three o’clock. With such an enveloping and theatrical backdrop to the scene, the President could stage himself before the citizens, as a Priest to his flock or a King to his subjects. It is possible that Hoban was influenced by this window and recognised its significance to Washington, however Hoban’s room had a bow at each end, one ‘stage’ mirrored by another, just as it did in the house in Ireland. It was an ellipse, copied and perfected from the designs he had drawn for Belcamp.
Who knows what Edward Newenham made of this when Hoban first introduced the oval room – this space of public encounter – to his private house but at some point they may have stood, face to face across the distance of the two foci, in that room with its three bay windows opposite a door, both alit from behind, the Catholic boy and the Protestant peer, temporary equals in a room on the move. In a room that stands for the motion of a promise that one centre cannot hold.

[2] The photograph was posted on the blogsite ‘Comeheretome’ and was itself from a link to the original photograph © leonotron.com (https://comeheretome.com/2011/04/15/belcamp-college-today-a-depressing-sight/)